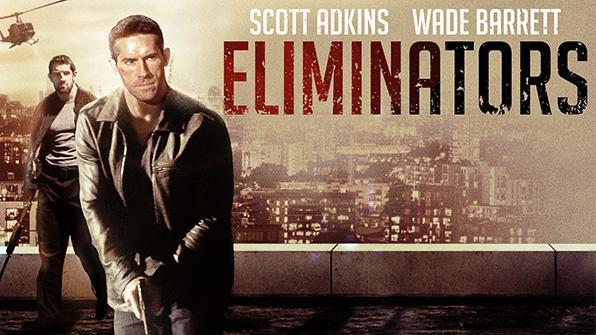 There was a time when going straight to home video was considered a death sentence for anyone working in the film industry. However, ever since the popularity of streaming services like Netflix, Hulu, and many others the image of it has turned around. Now more than ever it’s more common to find a surprisingly profitable home video market, especially in the action genre as it’s more unlikely to be saturated with CGI action, or incompetent handling of action sequences which tend to be the common complaints from action fans about major action film productions. While most of these straight to video action movies are of bad quality. From my experience, you can come across some that are worthwhile as Ninja 2: Shadow of A Tear, and Close Range as brainless entertainment. As unlikely as it to come across the solid straight to home video movie the name Scott Adkin is one you can be assured to contain good action sequences, but quality films isn’t one thing he specializes in.

Eliminators plot is so bare bones, much like its characters, that any sort of attempted exploration, same with a simple synopsis, can be classified as a spoiler. A majority of the movie is basically Scott Adkin getting chased by Stuart Barrett (who is best known for his WWE in ring name Wade Barrett), and looking for his daughter. However, there is so little to the story that I struggle to write anything about it besides simply stating it’s thin, has flat characters, and can go for several minutes of nothing significant happening. For example, when Scott Adkin enters a child services building from the moment Wade Barrett begins to chase after Scott Adkin it stays on this single chase sequence for around 14 minutes of screen time. In this very prolong chase the only piece of information that is gathered is Scott Adkin obtain the location of his daughter right at the beginning of this chase sequence. After that, it’s simply playing a game of avoiding Bad News Barrett’s bullets. This sequence also contains a continuity error as it begins in day time when Scott Adkin enters the child services building, and then becomes night time when both Adkin, and Barrett leaves the building. Implying that yes, this whole portion in the child services building possibly lasted hours, even though only a couple of minutes just passes for the audiences. 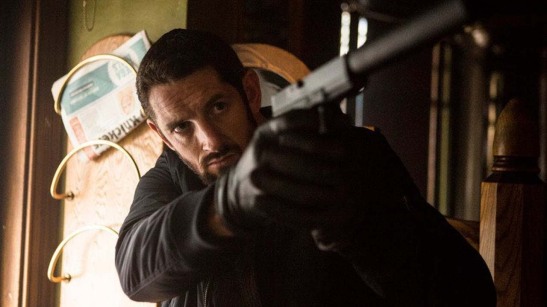 I’ve got around 7 bullets of bad news to deliver to you.

The reason movies like Mad Max: Fury Road, and Ninja 2: Shadow of A Tear work in spite of their slim story is they know how to have the action scenes to drive further engagement. In Fury Road, it’s a constant ongoing spectacle with gorgeous visuals that is upping the antics, and Ninja 2: Shadow of A Tear crams as much well choreographed action scenes as possible while it briefly makes work of its very generic story. In these two films, while the writing were weak they attempted to fill the void by having events in the films play out so it wouldn’t be a chore to view when there isn’t action on screen. Eliminators takes the structure of these two bare bone story movies, and decides to have even less story, and prolong action sequences.

So now comes the question if the story, and characters are bare bones does the action sequences make up for them, and the answer is simply no. With little to invest in it became difficult to care about the action scenes the more frequently they came up. The first fight scene has Scott Adkins fighting against two hooded robber with bats attacking him. It’s a amusing short fight, and the subsequent fights aren’t quite as fun to watch since Adkins make quick work of everyone else. That is until Stu Bennett appears in the film, and participate in the best action sequences with Mr. Scott Adkins.

One of two highlight scenes from Eliminators

The two fight sequences between Scott Adkins, and Stu Bennett are actually pretty good. A surprise given one is an martial artist, and the other is a pro-wrestler. There’s also a large height difference as Stu Bennett simply towers over Adkins. However, with both actors being professional in choreographed fights, Tim Man (the film’s credited fight choreographer) takes both men backgrounds incorporating their fights. Stu Bennett is very commendable for keeping up with Scott Adkins during their fight sequences, and visibly takes enjoyment in no selling the many Scott Adkins kicks he takes. During their first encounter Adkins, and Bennett don’t do any complex reversals, or complex techniques it’s still a good fight both men pull off. Basically ending up just being a showcase how much of a beating both man can endure in long takes, yet still continues performing the more of the action sequence.

Thankfully, Adkins, and Stu Bennett fights are enjoyable because they are the only while action sequences in the film. Whatever action the rest of the film has to offer isn’t quite as exciting, nor impressive to see. In particular a very lazy gunfight between Adkins, Daniel Caltagirone (whose character is forgettable), and Bennett in a single place. All that occurs in this gunfight is both men firing, missing hitting each other, one takes cover while the other does more shooting, and repeat the process for the rest of the sequence. Gunfights in Eliminators usually lack urgency since you know the main participants in them won’t get hurt. Sure, that’s same criticism can be applied to other action movies, but in Eliminators when your two top stars have to participate in all the action sequences it’s more noticeable neither will get taken out. Editing in them are fine, but the lack of interesting cinematography choices. Especially the last gunfight in the film where Adkins despite having the disadvantage of carrying a shotgun, and fighting against two goons whom have AK-47 (appearance wise at least) makes quick work of them. It’s their stupidity that gets them axe. One of them definitely deserves if they unload an entire clip of bullets onto a scarecrow.

In terms of acting Stu Bennett (a former WWE Wrestler) comes away the best in the film. Despite being asked to hardly deliver any dialogue Stu Bennett did the best he could. Without much to bite into his character Bennett visually sold his role of Bishop well coming across as a viable threat to the almighty Scott Adkins. Remaining silent for most of the movie, and given what his purpose of the film he’s easily the best actor. Scott Adkins is again is a reliable man of action, and his performance in this is a nice departure from his usual tough guy shtick he sticks with. He’s in a slightly more vulnerable state constantly seeing him either partially retreat in a action sequence, or seeing Bennett giving him a good beating does wonder for an actor who seemingly appears invincible in his movies. The supporting cast, same with the music, are forgettable addition to the flick. It’s simply better to look up clips of Scott Adkins, and Stu Bennett fight scenes, and not put yourself through a bare bones movie just for those scenes.

Eliminators is a bare bone action film that is unable to sustain its momentum through its entire run time. Thin characters, and a very basic story without much substance can’t be save by action sequences alone, especially when one of its major actor has to be kept alive in order for their to be someone competent for the hero to fight. It provides the goods in terms of action, but even with your brain turned off there isn’t enough here that warrants your visit.