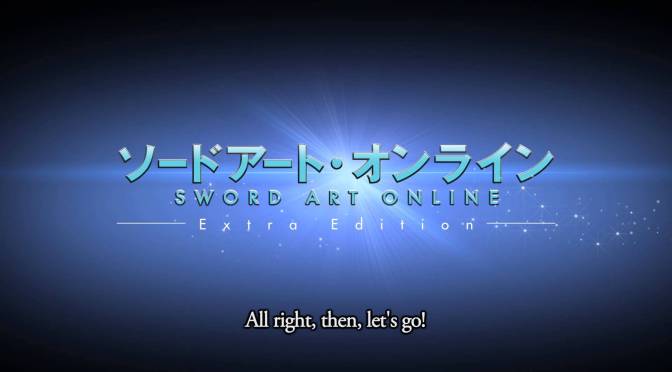 If you have never seen Sword Art Online I recommend you stop reading at the second paragraph (discounting this passage) since I go into spoiler territory past that. Using specific examples of important events in the series to prove a point on how badly this recap movie present the material. By the second paragraph I generalize the main issues without spoiling anything specific. I might not think the series is great, but I wouldn’t dare ruin the element of surprise for anyone seeing it for the first time if they choose to do so.

The anime Sword Art Online is a fluctuating experience. The story was stupid breaking its own logic, not understanding how video game programming worked and filled with some idiotic characters, yet it was for those exact reasons I kept watching it. Part of the appeal of watching Sword Art Online is that it was always entertaining no matter what happened. Whether it was good or bad there was something to go back to. Something this recap film fails to emulate in the same way and serves to further highlights season one weaknesses while barely displaying of the strengths it had in the series.

So in order to save both fans and newcomers time this film is basically a bad recap of the first season of Sword Art Online that lasts an hour and forty minutes. In the first hour and twenty minutes there is some new footage mostly of characters sitting and talking, but pale in comparison to the usage of clips from the series first season. The remaining twenty-minute is spent on a subplot involving Kirito and the gang exploring an underwater dungeon in Alfheim Online. For fans of the series I wouldn’t recommend seeing this film for the new material since like a character said in a scene before this movie ended it is unimportant.

The way more than of half of the film is set up is like an interview. A government official, Kikuoka Seijirou, wants some dangling questions regarding the Sword Art Online and Alfheim Online incidents cleared up. Despite Kitiro expressing that he told them (the government) like a million time what happened. Within the first couple of minutes this simple exchange of dialogue expresses how pointless it is for both Kirito and anyone who seen the series to go over what happened. While Kirto talks to Kikuoka Seijirou there’s a subplot involving Asuna, Keiko, and Rika teaching Suguha how to swim. This framing device among the girls provides some character moments with them commenting on each other story on how they met Kirito. It’s not a bad framing device even if the girls remain in swimsuits for most of the non-recap clips. Compare to Kirito narrative framing which adds nothing. The girls framing device provides the rare interaction between characters in the real world.

One thing that is fixed in the movie are certain plot holes aren’t made as noticeable in the film. In the first season of Sword Art Online it was established in episode two that beta testers were passing out guide books so non-experience players can learn how to play the game. Including clearly stating a couple of months has passed and people will in real life die if they die in the game. Apparently death is not a good motivation for some players to learn how to play the game. With that bit of information left out it managed to make the whole scenario come across grimer and make the players look less idiotic in comparison to the anime series. This is later counteracted when the film has Kikuoka Seijirou asking how Kirito he survived in Sword in Art Online despite it going against the video game programming. Kirito ignores giving any sort of logical answer. Simply put, he survived death by sheer willpower.

It does this on another important occasion including the cardinal sin of not showing what happened when Kirito faces Sugou Nobuyuki in the Alfheim Online arc. Before giving a flimsy explanation one of the last thing seen is Sugou about to seemingly rape Asuna in front of Kirito. After Kayaba appears to give Kirito a motivation speech, it cuts back to Kirito talking to Kikuoka. The only explanation that’s given regarding what happened to Sogou is he self destructed. Not exactly satisfactory when it’s casually resolved like that. I could only imagine how fed up non-viewers of the series might feel when seeing that.

For some reason Shigeru Nishiyama (the film and anime series editor) thought it was a good idea to cut out certain things for no reason. Near the end of episode ten when Kirito goes over to Asuna house there’s a misunderstanding. In the scene, Asuna finishes undressing after diner mistaking Kirito intentions, thinking he wanted to have sex with her when actually he just wanted to stay the night at her place. Kirito clears up the misunderstanding which intentional or not was a hilarious moment in the anime. In the movie, once Asuna finishes undressing and tells Kirito to take off his clothes it cuts to black. Fading into the two of them sleeping together in bed. So according to this movie both Kirito and Asuna had sex.

Another mishaps by editor Shigeru Nishiyama is how he presented Yui story in the film. This piece in the movie is terribly edited together with noticeable abrupt cuts that even non viewers of the series would be able tell had content cut out. Instead of showing at least a single scene of Kirito and Asuna bonding with Yui it just immediately goes to Yui telling the viewer what she is and then possibly dying. Not even the anime was as rush in the same way when presenting this storyline. Unless you have seen the anime this moment will leave viewers confused and with so many questions that won’t get answered.

There’s also a random cut where Yui is around the same size as Kirito in Alfheim when Kirito enters Alfheim Online for the first time. Later in that moment the next cut shows Yui in pixie size. There was no point in cutting out Yui shrinking herself within the same scene which by doing so also cut out the explanation Yui gives for still being alive in the video game. Why this was cut makes no sense.

A shared element of both the film and anime series is Asuna getting the short end of characterization. Like in the anime, Asuna personality is no different from a thin piece of paper with boobs drawn on. However, it’s not presented in the same manner. The film doesn’t introduce Asuna as a capable player which in turn makes her role in the story less of an issue. Her role does not receive a downgrade in the film, which is a slight improvement to how she’s presented in the anime. Unfortunately the movie does not make a good case for Asuna being the center of Kirito affection. In the movie she’s just presented as an another girl who fallen in love with Kirito on a whim.

Suguha on the other hand is presented as having an actual relationship with Kirito. Unlike the other girls, Suguha is the only one who is shown having a conflict with Kirito and solving it with him. Suguha side of the story paints her in a better light showing the rough side of her relationship not just the good moments. Just like in the anime, Suguha is the only female character who gets any good characterization in the movie. She’s the only character in the movie who has a conflict to overcome from the beginning of the movie all the way to the end. It’s not much characterization that gets added to her, but it is far more significant than what the rest of the cast gets. Nothing.

Music while good gets replaced or amped up version from the anime series. The most noticeable is when it splices both of Kirito attempts to conquer the world tree in Alfheim Online it uses “Innocence” by Aoi Eir for those scenes. This specific track is not as effective as the original track use in the series. For the most part, the soundtrack is thankfully untouched. While not good enough to stand on its own without the help of the anime visual it works just fine in the movie as it did the series. There were times I will admit the music did get me to forget the issues I had and got me to enjoy what I was watching. Also, there were times where the editing would use a track to unintentional comedic effect. Simply cutting or fading out at a bad time. The voice work for both the Japanese and English cast is similar to the anime series. If you want more emotional performances watch it with English subtitles or if you want subtlety (and no stuttering) albeit with some underplayed characters go with the English dub. Unfortunately for both cast, it feels like rehash performances.

The last twenty minutes contains all new footage and stills without splicing any footage from the anime. It’s a simple subplot of Kirito and the gang exploring an underwater dungeon. If it wasn’t included in the film the material would have been just fine released as an OVA. The new material in the last twenty-minute is decent as a whole. As usual, despite playing an MMO and how they are actually design Kirito is able to handle any situation virtually by himself. What the new material does get right is capturing the fun experience from the series. The humor is intact and the interaction between the characters prevent things from being boring. Where it stumbles is the new material is not entirely animated. There’s some action oriented stills which would have made up for the disappointing climax at the end of the movie. Setting up what seems like would be a cool action scene, only to have an outside force and one-shot character fix everything. I can’t forget how easy it was to figure out the identity of the NPC giving the quest. Surely a better name than Nerakk for an NPC could have been more clever to hide the true identity for English speakers. Just change around a couple of letters and you can solve what the NPC actually is.

This movie is pointless offering only twenty minutes of new material, but even with that new material it is pointless. Aside from Suguha getting a small bit of new characterization nothing significant is added. Failing to condense the material of the first season of Sword Art Online and getting it to work in a movie format. The one to blame for this terrible piece of a film is not the source material since in the anime it does have good scenes that work in favor of the story, but the editing and the way the film presents them is to blame. It was sloppy, rushed, forgetting about the tiniest details like showing what happened to Sugou for a resolution. Instead of at least being a pleasant walk down memory lane it come across as a waste of time. There isn’t enough new footage to recommend to fans and it’s not a good presentation of the series for newcomers. You’re simply better off just watching the anime series or reading the light novels. No matter how they turned out, they at least will offer a complete experience unlike this film.