One of the many joys, and misfortunes of seeking out lesser discussed anything is the experience of it. From witnessing a very cool action climax in The Dragon Family (1988) to finding a surprisingly great movie in Return Engagement (1990) make going through the slough of bad films worth the endeavor. City Kids (Ren hai gu hong) from director Michael Mak is one film that sadly is another name on the increasing list of forgotten films not worth digging up.

City Kids attempts to tell a story about delinquency in youth Third Lam/Chor-san (played by Max Mok) as a refugee from China fleeing to Hong Kong, and the tragedy of his life. The film’s story is done no favor by the editing, but before getting to that whole fiasco, in terms of writing the film does too much in to little time. It wants to cover a life, and a significant portion of it just comes across as a cliff notes version of events. For example, Third Lam doesn’t have a good relationship with his cousin, but only in one very brief scene do they ever exchange dialogue showcasing their trouble relationship. Another example would be the lack of a father figure in Third Lam’s life. In the story, the closest person to fitting that bill would be Big Skin Chuen (played by Shing Fui-On), but once Big Skin Chuen purpose in the story is served there’s no time spent reflecting on his influence on Third Lam’s life. Instead, the film immediately moves on to the next important event in Third Lam life. By not providing anything substantial there’s no one to relate to as a character. Third Lam is simply representing delinquency with a rough upbringing on a purely surface level, and just using that background to tell its viewer anyone can turn over a new leaf no matter how far you’ve fallen in life. A well intended message that likely won’t impact its viewers because of how shallow it characters feel.

I must have misremember The Karate Kid.

With Third Lam suffering from a cumbersome collection of undercook ideas this also works against the more stable emotional core of the story. Throughout the film, Third Lam best friend Sas (played by Andy Lau) is shown to have significantly impacted his life in the worse ways possible. However, the film never portrays Sas friendship as one of pure negativity, nor one of an over controlling figure. The writing perfectly balances Sas as being his own individual, and not placing blame solely on him for the course that Third Lam’s life took. Sas is simply an individual struggling through the same ordeals as Third Lam, but tackles delinquency in a different manner. Fulfilling his role as a contrast to Third Lam in its exploration of delinquency.

The purpose Sas serves in the story works well, what deteriorate Sas positive contribution is the melodramatic writing in the heavier scenes involving Sas, and Third Lam. In the middle of the film, Sas, and Third Lam are force to fight each other in prison to settle a gang dispute. Portraying the fight as a tragic moment being the only time these two ever harmed each other in their entire life. However, before this scene the film shows two times how Sas action inadvertently forced Third Lam to be in the situation he’s placed in. Making whatever beating Third Lam gives to Sas to be unintentionally justified. It works against the intention of the sceneas neither character harbor bad will towards each other after the fight. Rendering whatever dramatic weight it was meant to have mute.

In City Kids it’s not just the larger picture that fail to deliver any dramatic weight, but also what should make up the smaller human moments. For example, Third Lam romantic subplot is one that could have been delved deeper into, but after a while is unable to flesh it out further pass the halfway point. For as sloppy as the romantic subplot is handle it’s nowhere near as bad when regards to Third Lam family members, and his issues that surround them. At least with the romantic subplot there were efforts to develop it. Thanks to a large part of Sas acting differently towards women in contrast to Third Lam allowing enough material to come full circle making the sequence where both discuss about their love life work dramatically. Third Lam family issues, much like the rest of the film, is in its own inability to develop good material with its lead by himself. The largest offense is the plot twist revealing who’s Third Lam father is, and it happens fifteen minutes before the movie ends. Not only is the reveal pointless, but nothing poignant can be done with the little remaining time it does have.

The only time the film had any good moments were when it slow down in the final ten minutes of the movie. I would like to discuss the final moments of the film, but they’re significant plot points, and that would spoil the only worthwhile moments in the film as a drama. In particular the final two minutes before the credits started rolling I found effective. Despite the rush nature to explore Third Lam life, finally seeing him think about his actions while possibly choosing to continue his downward spiral in his life I found engaging. There was conflict, there was reflection on it, and it wasn’t rushed which is why I was engaged. There wasn’t any sort of time allotted to other important events within the story that captured my attention, and sadly there’s no fixing them. It was simply rushed with too many undercooked story elements to be an effective crime/drama about delinquency.

When it comes to acting, same with the score by Richard Lo, it’s simply modest. There isn’t any performance in the film that stands out in any negative, or positive manner. The best bit of acting comes at the end of the film when Max Mok displays an eruption of several of pent up rage, and sorrow in the final moments. It’s also the only time I felt music, acting, and cinematography complemented each other wonderfully.

Max Mok as Third Lam is serviceable as a leading man. He’s capable when it comes to the lighthearted scenes with natural charisma, but when it comes to the dramatic scenes he’s struggle to be convincing. Unable determine in part of a scene should he deliver an emotional response. For example, when Max Mok character finally meets his ex-lover in prison to learn about what happens to the baby. What Max Mok was attempting to get across in this brief scene is uncertain. His line delivery doesn’t suggest sadness, and his body language can be misread as confusion, or plain juvenile. Mok other dramatic scenes also suffer similar issues in terms of how Mok chooses to deliver the material, but improvements are visible the longer the film goes on.

My typical reaction when this movie attempted drama.

Max Mok co-star, Andy Lau who plays Sas, fairs a bit better overall, but both really shine with their onscreen chemistry. Given that a majority of the film they spent together both are able to make lackluster material believable. Unlike the screenplay, when both Mok, and Lau are on screen regardless of the scene tone both portrayal comes off as genuine. It’s the elements that surround their scenes that hold them back from.

In a crime/drama film about delinquency it would serve the story well if it completely disregarded the three short choreographed action sequences it has in the final act. The choreography in them are fine, but when the rest film attempts to be realistic without any over the top elements it stylistically conflicts with each other.

Finally, the biggest detriment to City Kids is hands down the editing by Hung Choi. Typically when it comes to movies regardless of quality a majority of the time I don’t even pay attention to the editing. The few times that I do it’s either because of its seamless flow enhancing the viewing experience (like Blade Runner 2049), or when masterful editing is absolutely integral to the film success (like Christopher Nolan’s Dunkirk) does editing in film ever register with me. However, the same doesn’t apply to bad movies as it’s rare that I contribute an entire film problems to the way it was edit. As you know, I then suddenly saw this film which now I can use as a future example on how not to edit a movie.

The most obvious issue in the film editing is there are times in the film where a cut won’t simply just transition to a new scene in progress. On a few occasion Hung Choi (the film’s editor) for who knows what baffling reason would pause the current scene, slide in the new scene paused, and after a couple of seconds resume the new scene. It was jarring to see such an issue not get fixed, and yes, this editing mess up is even on the film’s own DVD release which I own a copy of. Another thing Hung Choi does too frequently is cut away from a scene too quickly. I mentioned a scene earlier with Max Mok, and how he is uncertain to act in a scene where he learns unsettling news about his child. A reason why the scene doesn’t work is because Hung Choi fades into another scene very quickly instead of lingering on Max Mok performance for a bit longer to let the scene properly finish. In return, it makes Max Mok clumsy performance of the scene more noticeable. 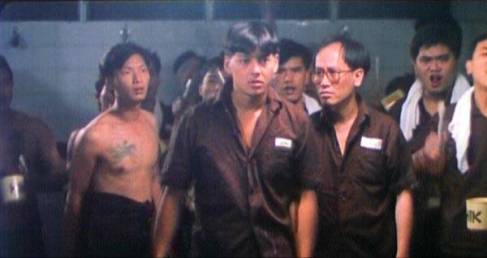 Not a good sign if there’s this many prisoners in the showers.

Another is that early on in the film Choi splices in too many significant sequences together making it story’s intention muddle to the viewer. Hung Choi lack of knowing when to begin, and when to end a scene is consistent throughout the film. For example, Choi decides that instead of letting a scene of two best friends force to fight each other just play out without any theatrics he feels cheesy music, slow down footage, and splicing in scenes from earlier in the movie would add dramatic weight to the film. Obviously it didn’t work out how he wanted. Finally, the biggest drawback to his editing is the inconsistency of scenes length in the film. Granted, what film is going to have every scene be the same length, but in City Kids it’s very noticeable seeing minutes be kept on characters picking up girls while only allocating seconds to dramatically significant scenes. Choi simply doesn’t understand in this film when his influence is required.

City Kids fails as a drama with a unclear direction on how to properly explore youth delinquency. A rush pacing prevents Third Lam from feeling like a fleshed out character while side characters in the story don’t offer much to the story beyond their introduction to the story. Another facet to its negative quality is the editing by Hung Choi really bringing it down despite the best efforts of Max Mok, and Andy Lau to bring out the best quality of a lackluster screenplay. As hard as Max Mok, and Andy Lau might try they can’t overcome rush pacing, and bad editing. Michael Mak’s City Kids gives the impression that it should have been more than what it ended up being.