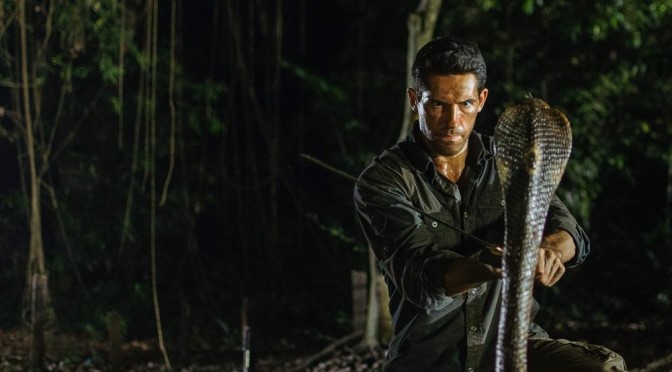 Two years ago I saw the original film simply titled “Ninja” (2009) which had solid action scenes for a low budget film, but that’s where the compliments end. Nearly any film with the titled “Ninja” is guaranteed to be awful. Either being ninjas are difficult to modernized or most of the ninja titled films tend to go in a downward spiral in their writing. “Ninja: Shadow of A Tear” is one of the better ninja movies while its simple plot won’t amaze a good pacing prevents the action from becoming tiresome and a better direction elevates the production sides.

Ninja: Shadow of A Tear tells a basic story about Ninjitsu master Casey out for revenge when his pregnant wife is murdered. As action movies goes it’s as straightforward as it could be. Wasting little time on character development, building up the villain (an evil drug lord no less), or challenging the character’s morals. All of which is done in a hasty matter to advance the familiar plot threads if spend too much time on would have lead to boredom. Benefiting it’s clear rehashing of plot points is good pacing. Being simple enough to follow spacing the action enough for it not to become tiresome. Allowing enough room to setup the many action scenes it has in a somewhat justifiable manner the serves the plot some purpose. In terms of characters it’s filled with stock characters from the lone wolf hero, Indian accent taxi driver, the former rival, and the classical last minute villain switcheroo. The same rule also applies to the scenarios the hero is put in. You’ll know the hero will fight behind a bar, get tortured, escape from a prison, go looking for hidden military base in a forest, eventually kill drug lord soldiers, and the rest action genre veteran or not can predict what’ll happen next. Resembling a setup more fitting for a video game the plot won’t stick to mind in any form, but if it does anything correctly aside from pacing is working towards the production team strength.

Scott Adkins as an actor has little range, but thanks to the script he’s mostly required to be angry, focused, and leave his martial art do the talking. Adkins just like in the previous film is a solid fighter who knows how to perform a good fight. He’s agile that his fight scenes are fast performing elaborate moves that shows his skills even while wearing a Ninja suit. This being a Adkins film vehicle he’s merely here to show off his fighting abilities. The cast are adequate to not ruin the film. Being aware of what roles they’re playing the cast do what is required in them. Director Isaac Florentine knows how to frame an action scene and puts a bigger budget to better use. Unlike it’s predecessor this sequel has night scenes that actually look like they take place at night. Also a plus is the non use of shaking cam during action scenes. Everything on the production side is as solid as it could be delivery the goods in satisfying results. Much like the story nothing will inherently stand out, but the commitment from the production team to strive for better is clear.

Ninja: Shadow of A Tear is an enjoyable brainless action film and not as bad as it could have been for a film that went straight to DVD. The plot is typical and simple, but is a complemented by good pacing, solid action scenes on a low budget, and solid production values. For a film with “Ninja” in the title they’re certainly worst out there, but few ninja films are as watchable even with your brain turned off.