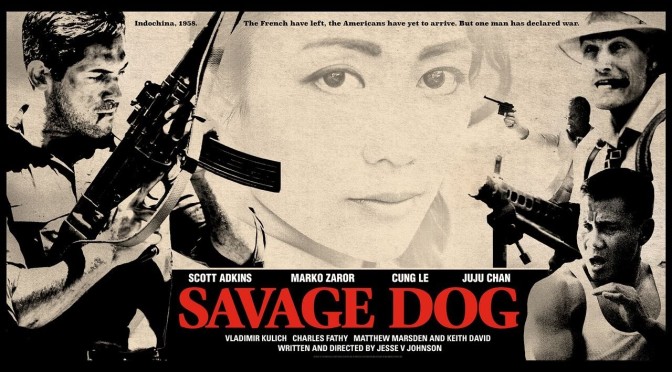 There was a time where straight to home video action films were the absolute worst the action genre could provide. Nowadays the notion hasn’t changed, but there’s been a steady rise in quality thanks to talented filmmakers knowing what to provide to its audience, and without it feeling like a cheap cash grab. One actor in the forefront in these straight to home video action movies is Scott Adkins. An actor who appears in some big budget movies in bit roles like Doctor Strange (2016), and The Expendable 2 (2012), but is mostly stuck in lower budget efforts. The trait most of these lower budget efforts share is Scott Adkins always work with competent directors whom also share his desire to make the best possible film despite their limitations. Sometime they work as mindless entertainment like with Ninja 2: Shadow of A Tear (2013), and Close Range (2015), while duds like El Gringo (2012), and Eliminators (2016) being just as common in his filmography. One thing his film can be counted on for is supplying good action sequences, and thankfully Savage Dogs falls into the category of Adkins better films.

Adkins: “They won’t release me until I improve my acting.”

Savage Dog is set in 1959 Indochina, following Martin Tilman (Scott Adkins), who is due for release from Den-Dhin-Chan labor camp run by Vietnamese warlords and European war criminals, but the corrupt forces running the jail will do everything in their power to keep him locked down. Telling a simplistic story in its heart, but aiming higher than it could achieve. The first half of the film focuses more on developing characters, and trying to tell a story about finding a purpose. Using the first half purely as buildup to eventually rein in the carnage the second half of the movie will be dedicated too. While the sentiment is admirable, the execution is simplistic on all front. Characters are typically shady, and money hungry all in the effort to evade consequences for betraying their country. It sounds like these characters have depth to them. In actuality, that’s about as far is it goes for developing most of it characters whom just meant to add to Tilman body count. It easier to root for our ex-British officer whom is hunted down by his own country when one of your villains is a ex-Nazi. Also, characters reiterating multiple time their all ex whatever of a certain country helps too.

In spite of a runtime of 94 minutes, the pacing is generally slow, but works in service of the movie. This does negatively affect some aspect of the story, like Martin Tilman romantic relationship that is meant to be the dramatic core of the film doesn’t work. Most of the bonding between Tilman, and his lover is glossed over. The other aspect of Martin Tilman that is tackle somewhat well is Tilman looking for purpose in his life. Evolving from his introduction into a satisfactory character arc. Aspects of Tilman past are kept limited, and to the point. Supporting characters are fine. Isabelle (Juju Chan) arc revolves around her believing in the good of people, and keeping that belief. She doesn’t grow beyond her introduction, and mostly serves the role of just being the love interest. One other positive could be Isabelle doesn’t become a damsel in distress, but at the same time it means she becomes useless to the story after the first half of the movie is done.

The only other character left to mention is Valentine (Keith David) whom also serves the film narrator whenever needed. Out of everything in the writing, Valentine narration is easily its biggest fault. Whereas the previous faults mention contributed somewhat positively to the bigger picture, Valentine’s narration could have been entirely removed. Sometimes stating the obvious, and sometime summarizing the purpose of a scene in a couple of sentences. For example, when there’s a scene of Isabelle, and Tilman relationship becoming more romantic, Valentine tells the audience exactly what they’re seeing. Same with when Tilman is brutally fighting as a bouncer against some unwelcome guest, and Valentine’s states (paraphrasing) that something savage has awaken within Tilman. Quite insightful in stating the obvious. Most silly of all, is given the fate of Valentine’s character he’s basically narrating from beyond the grave leading to some confusion. Sure, revealing the death of Valentine’s character could be considered a spoiler, but given his only purpose is get to killed, and provide pointless narration it’s better to have you prepare beforehand about that odd narrative choice. 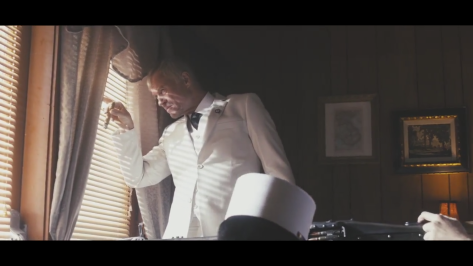 So, this is Colonel Sanders with a clean shave.

Lastly, the second half of the film is where it finally picks up. Seeing Tilman embraces his anger, and seeing him kill a dozen, or so people like a one man army is it biggest strength. Narratively, the first half did a competently enough job to make this action onslaught satisfying. The hero is easy to root for, and the villains are easily detestable. Unfortunately, the first half is a hindrance with very little interesting things happening. Since the material never raises to the level it wants, die hard fans of Scott Adkins movies, or action junkies can endure the rough first half, but the average viewer isn’t as likely to stick around. For those who stick around will receive everything they could want from a lower budget action film starring Scott Adkins, even if it takes a while to get there.

Scott Adkins takes the lead as Martin Tilman. In terms of acting, Adkins takes a wholly serious role. Unlike his usual film, his cockiness that he portrays in some of his roles is absent here. Removing part of his charm that can be found in El Gringo (2012), and Accident Man (2018). When wholly serious, Adkins limited range of acting shows a lot, especially in the first half. Struggling to displays the years of violence, and yearning for a purpose Tilman is meant to have. Some of Adkins weak acting is hidden by having him participate in some fight sequences in the first half where believing Adkins is a expert fighter is easy to accept. Believing Adkins is a lost soul of sort is a pill not as easy to swallow. However, in the second half of the film, Adkins improves as the stunt work, and action sequences he’s good as performing become more prevalent than his dramatic chops. Adkins lack of strong acting chops is forgivable since the second half highlights his strength better.

Supporting cast on the other hand come off as decent. For instant, Juju Chan whom plays Isabelle does good all her dramatic scenes. It’s night, and day how easily Juju Chan can emote in her delivery compare to Adkins. However, she’s also quite a capable actress able to work within Adkin limited dramatic chops to make a scene work better than it should. Just like the rest of the cast, the only issue I have with her acting is it’s mostly one note. Keith David whom plays Valentine delivers a good performance. He’s able to be more loose since his character isn’t as serious compare to everyone else. However, his best part of acting is when he’s narrating, giving some power to his narration, even if it’s ultimately pointless.

Finally, the cast of evildoers themselves. Vladimir Kulich is easily the best actor among them, though because of bad writing he reiterates the same dialogue multiple times throughout the film. He performs the role of a ex-Nazi without hamming it up, or being cartoonish. Marko Zaror plays another one of the baddie, as well as being the only other person, besides Cung Le, who can stand evenly with Adkins. Performance wise, both Zaror, and Cung Le are mostly one note. Cung Le has to come across as intimidating while Zaror somewhat has to give off a similar vibe. They do decently since they aren’t required to express much in their characters like Scott Adkins.

When it comes to action, Savage Dog tries to be more realistic than Adkins usual film. Just a bit so the usual high kicks, and more elaborate martial art fight sequences Adkins is known for are tone down. Yet, don’t become a detriment to the action sequences. What partially makes up for this is sometime seeing gore within the action sequences. There’s isn’t a lot of gore, but when seeing the sight of a man face getting blown off by a shotgun at point blank range in a close up shot, or seeing Adkins decapitate someone’s head what gore it has truly satisfies. Not to forget some of the gore special effects are surprisingly good despite the film obvious, limited resources.

The fight sequences in the film are easily the standout of the film. They make up a majority of the action bits. Fight sequences in the first half are entirely one sided having Adkins easily beat whoever he’s fighting. Adkins fight are more of a bare-knuckle variety mostly punching his opponent with maybe the occasional kick. Just when you think you’re tire of seeing similar looking fight scenes. The second half allows Adkins to fight tougher opponent on two occasion. One of them is against Cung Le who gives Adkins a good beating. Unfortunately, the fight between Cung Le, and Adkins ends anticlimactically. Granted, the way it ends makes sense in context, but it just strange it chooses this moment to go against action movies norms.

The final confrontation between Adkins, and Marko Zaror is also a good one. It’s the only time in the film where Adkins has to overcome a foe whom has the upperhand in a fight. Unlike previous fights, the “realism” is slightly more removed here whenever both Adkins, and Zaror trade blows with knives. It doesn’t end the film on a bang since nothing elaborate is done in the film, but it does provide the film final moment of gore before ending which is probably one of the best moments in Scott Adkins career.

How much get can I get for this head?

The other action set pieces typically have Adkins blowing holes into peoples with guns, and barely getting hit with bullets non-stop. Gunplay is more interesting than your average action movie with Adkin seemingly being quick enough to dodge gunfire regardless of what gun is being used against him. Seeing someone get shot is made satisfying when seeing blood squib explode in small amount. Only negative to the action sequence requiring Adkins basically taking out an entire army at their base is the low budget here becomes the most apparent. Throughout the movie, the small budget is concealed well enough, but this particular set piece instead of seeing dozen of men go after Adkins at once you likely see at most 3, or 4 go after Adkins. It doesn’t feel like Adkins took out an entire army. However, that’s a small complaint against it. Jesse V. Johnson knows how to crafts, and capture action satisfactory.

Savage Dog ambition is never met, but is far better than your average straight to home video action film. Offering a refreshing setting, solid acting among the cast, and some good action sequences with the rare moments of gore to enjoy once the carnage kicks in. It’s a not a film I would give a general recommendation since it’s faults easily can ruin the experience for an average viewer. At 94 minutes, for fans of action cinema craving for another solid flick, or fans of Scott Adkins this is recommended to check out.