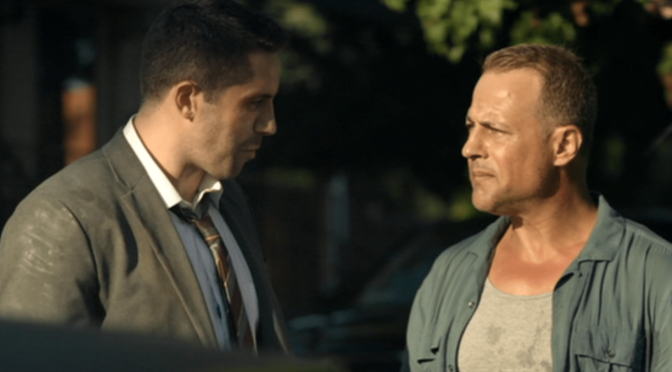 In 1986, there was a Hong Kong movie called A Better Tomorrow that influenced a entire film industry, and was the first of many collaboration between actor Chow Yun-Fat, and John Woo. While it’s uncertain the collaboration between Scott Adkins, and director Jesse V. Johnson will have any kind of effect on the direct to video action business. They certainly are leaving a mark already. From Savage Dog (2017) an ambition action movie with a historical background that’s solid, to the surprisingly good comic good adaptation of Accident Man (2018), and now a film with direct inspiration from buddy cop movies with The Debt Collector (2018). Adding on to the list of good films under their collaboration.

The Debt collector follows classically-trained martial artist French (Scott Adkins), who goes to work as a mob debt collector in order to save his gym. This synopsis sounds like something out of a early 90s action flick, and in some ways pays homage to that. Teaming French up with experience mob debt collector Sue (Louis Mandylor). Starting the relationship in predictable, but well executed fashion of the two not getting along, and over time striking a closer friendship. The banter between French, and Sue keeps the film proceeding events engaging when action isn’t on screen. Making wisecracks at each other expense, talking about the moral lines that should never be crossed in their line of work, sharing a bit about themselves, and some very subtle references to some of the actors previous works for fans to catch. Also, some tongue in cheek lines to the sorts of movies it burrows from.

What simply starts as a series loosely strung together events do lead up to a overarching story. It takes halfway through the movie before it gets there being more incline to be character driven than story driven. Slowly having French, and Sue engage in various scenarios all of which end up going south. Mixing tightly choreographed action sequences, comedy, and the occasional characterization into it many scenarios. Once the overarching story becomes a mainstay it’s also another predictable path. Leading to French to further if what the job requires of him is actually worth it. There’s the part of learning about his target making him reconsider his job. Coming together in a climax with a unexpected outcome for a movie starring Scott Adkins, and even more surprising is the ending. It’s an ending ultimately suits the story for how far both French, and Sue went for their job by having actual consequences movies it is homaging wouldn’t go for. Earning it’s ending by having its characters question what they do, and taking the time to delve into that. However, it does mean anyone expecting the usual triumphant Scott Adkins climax in this movie will be disappointed when not receiving it.

One noticeable misstep in its early goings is completely ignoring the whole save the gym motivation for French as the film progresses. It does kick off the plot in a organic fashion, but a more personal driven motivation would have serve a greater purpose in the long run, especially considering the course it final act takes. Briefly touching on the value French gym has to him will suffice initially since it’s a fun throwback action flick. That is until you reach the final act where it changes course, and the undercooked motivation weakness comes into full effect. Aside from this misstep in the beginning, just about the only other major drawback would be the uneven structure. Half of the movie is packed with action sequences one right after the other, and the other half takes a drastic turn into the dramatic side with some splices of comedy. Taking into account the story’s intention it misdirecting the viewer works in it favor. Well, mostly. Throughout the movie, you see stock footage of cows eventually being taken to get slaughter. It’s on the noise in it’s message delivery, and far from subtle as the closing lines hammer its point home.

Scott Adkins takes the lead as French with his British accent. This role allows Adkins to stretch more of acting chops than his usual role, though isn’t given any heavily dramatic scenes. The most dramatic he’ll get is letting out a sigh of exhaustion. While his dramatic scenes are lacking what isn’t is Adkin capturing the straight man characteristic of his role. Managing to be convincing as someone out of his element. Where he does deliver the most is where it counts (besides the action sequences) is with his co-star Louis Mandylor. Adkins rough straight man attitude compliments nicely against Mandylor sleazy has been demeanor. Mandylor easily outshines Adkins since the material provides him opportunities for his character to be more intimate with those around him There’s also intensity in Mandylor which he captures perfectly in his eyes when he has to get his hands dirty. Their chemistry is the film biggest strength creating something that feels genuine in the actor comradeship with each other. It’s unlikely you’ll care a deal about the characters, but you’ll definitely find the duo entertaining if nothing else.

The supporting cast will largely go unnoticed since all of them get push to the wayside because of the film’s story. Only Jack Lowe is able to leave much of an impression in a small role since his character is begging for his life. Showing an ease to become a character with not a lot to chew on. Biggest surprise is easily Tony Todd. He doesn’t get plenty of screen time, but visibly has fun in his brief appearance. Then there’s Vladimir Kulich in a bigger role who also doesn’t have much screen time, though he’s enjoyable if only for the fact Adkins is once again playing a character who works for Kulich. Other than that, the supporting cast do fine in their small roles that do prevent nearly all of them from being able to shine does also mean the acting in general is better than average in your direct to video action films.

When it comes the action side, fight choreography is handle by Luka LaFontaine (also responsible for the fights in Savage Dog) goes for a more grounded treatment to better fit its movie. Meaning, restraining Adkins from using many of his high flying maneuvers in favors of a more brawler like approach. Thankfully, LaFonatine is more than capable to get creative with his fight choreography. Since Adkins typically fight with men taller, and bigger than him this makes fight scenes eventful as none of them go down easily. LaFonatine is able to corporate some clever counter moves into his grounded choreographed fights without them feeling out of place. Seeing Scott Adkins get fling into a wall when someone blocks his punches, or seeing Adkins get slammed multiple time on a bar table when the person he’s fighting him won’t let his go of his grip is nicely worked in. Adkins receives plenty blows in the film requiring his character to either fight out of a scenario where he’s out number 3 to 1, or use something in his environment to get the upper hand. The action choreography is perhaps the least complex Adkins ever performed, but it’s shot nicely, and edited together nicely to make them entertaining nonetheless. The film does have one gunfight towards the end, and it’s pretty laughable it continues the tradition of people constantly missing at point blank range in Adkins direct to video action films. It’s further highlighted by the fact that Adkin character background, but it’s still an enjoyable gunfight in spite of that leap in logic.

The Debt Collector proves that Jesse V. Johnson, and Scott Adkins compliment each other really well. Jesse V. Johnson molds a story, and character that are engaging while allowing Adkins a departure from his usual roles, and letting the action experts do their thing. Adkins is able to rely more on his acting, and is able to hold his own against Louis Mandylor who takes the spotlight from him. When it comes to the action side Adkins is always reliable on that front, but here it’s nice to see him shine in a different way. Jesse V. Johnson, and Scott Adkins shortcomings in their fields are evident, but their understanding of each other strengths compliment each other in the films they make, and that’s make them an effective team. Producing far better films than you would expect from the direct to video market.