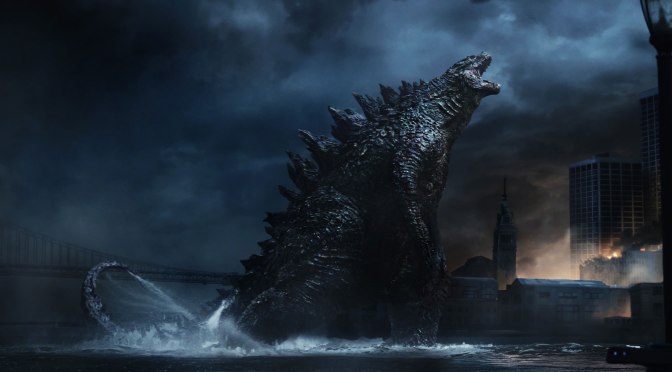 In 2012 the world saw the release of Skyfall which honored the heritage of James Bond and paid tribute to it past without succumbing to the norm of blockbuster pitfalls. Fast forward onward with 2014’s Godzilla and it is that same exact franchise film, but more so needed for a bygone genre. Coming from someone who considers the 1954 original “Gojira” a masterpiece and one of his personal favorite films it inherits a Godzilla film DNA into its modernization. Like the best film in the long running franchise, Godzilla is less interested in a giant monster’s destructive progress than in what it might feel like to be a tiny human watching it close up, or far away, or on TV.

Godzilla is about U.S. Navy lieutenant Brody attempting to stop Godzilla from destroying parts of the United States to protect his family. The structure and pacing is equal to the 1954 original. In fact, the affection and respect that the creators have for the film that birthed Gojira is felt throughout. As in the classic, they hold the titular monster back for quite some time, and it unveils at a slow pace. Setting up an atmospheric presence with us humans being marginally inferior when compared to the massive creatures. Making us more aware of the devastation and death that would occur if its scenarios were real. Borrowed from past templates is the American military every man archetype leading character with scientists and generals supporting characters meeting regularly to discuss unfolding developments and devise ineffective solutions. These human characters are token in monster films addresses the template flaws without so much eliminating the problem. All the two dimensional characters have simple goals and strong emotions, and they never feel awkwardly shoehorned in, as humans in monster flicks often do.

Godzilla design oozes classical Godzilla. Gone is the man in the suit, but retain are the likeness to it. The spiky back plates, the gigantic tail, the stomping foot, the massive chest are kept, etc. His body structure towers virtually over every building, his body movements is similar of a human wearing a heavy costume, and his presence never becomes just an effect. It’s a character that contains his own arc alluded to the protagonists own arc as both overcome two different species that do all in their power to stop them. When Godzilla is fully reveal it’s awe inspiring as it menacing in the way it’s done. After rampaging destruction in the airport we are put on ground level. Seeing a foot engulfed by smoke that slowly pans up to reveal the sheer massive size and commanding presence with his thunderous roar. The other monster in the film are the massive unidentified terrestrial organism or MUTO for short. As hinted to by the brilliant opening credits that ties itself with the original gives hint of the kind of monster it is. Mothra is mentioned which ironically is also Godzilla most famous foe, but MUTO are entirely different in biology. Muto can be described as a more mechanical Mothra with bigger claws, big in size, and without wings can still fend its own against Godzilla in some breathtaking action when they share the same screen.

Director Gareth Edwards has taken visual and tonal inspiration from Steven Spielberg. More specifically Steven Spielberg’s “Jaws,” “Close Encounters of the Third Kind” and “War of the Worlds,” as well as from earlier popcorn classics that shaped Spielberg. It is obvious from the start of Spielberg’s tone and style being a important influence upon Edwards, and it is used to a great effect. From the orchestral score to to the iconic visuals, this Godzilla movie doesn’t hesitate to be bold. However, it also takes cues from the slow burn of Jaws, lending more to the anticipation of our first clear look of Godzilla. Going more so being captured in the moment than playing out like a film. The cast provide good performances even if the material doesn’t come through for them. Bryan Cranston delivered a brilliant on-screen hammy and over the top performance showing an understanding of the kind of film he’s in. Aaron Taylor-Johnson is decent at the protagonist being overshadowed by Bryan Cranston more personal, fully realized character. Johnson has the every man look as oppose to his extraordinary luck to survive the instances he’s in danger. Repeating the cycle of exposition and reaction to monster. Elizabeth Olsen is limited in her scenes spending most of her screen time look at the camera and giving a reaction. Ken Watanabe is committed to his role which unless you seen the original the importance of his role will fly over your head.

Godzilla carries the torch of tradition of what makes a Godzilla film and is a terrific modernization of a genre film. Call this closing a cop out on my end for not wholeheartedly supporting a film I gave a perfect score too, but the execution by Gareth Edward is not so much to change as so much reaffirm your position on the genre. For those exact reasons Godzilla 60th anniversary film will be enamoured with praise from those (including myself) who see the appeal of a bygone genre even with it inheritance of shortcomings. It’s also because of those same reasons (two dimensional characters, actors limited range due to roles, silliness not blending with serious tone, numerous reaction shots, etc.) those on the opposite spectrum will too be reinforced by their feelings on why similar films do not co-exist equally with other genres. If there were to be only one thing taken by this film on both sides that would be the meaning behind destruction has not disappeared from the blockbuster. Godzilla is just as capable to get your blood pumping in large scale destruction as well as hold that same destruction with various emotions as we watch helplessly unable to change the outcome. 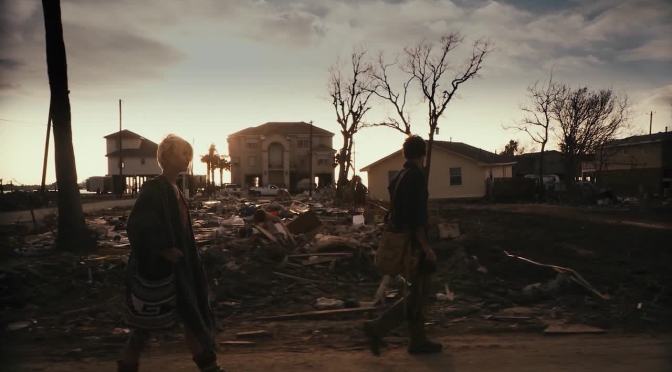 With a title like Monsters what would you expect to see, lots of Monsters. Unfortunately the misleading title isn’t the only thing disappointing about this movie.

Six years after Earth has suffered an alien invasion a cynical journalist agrees to escort a shaken American tourist through an infected zone in Mexico to the safety of the US border. The story is not awful, but it’s not good either. Now I will say none of the main characters get annoying because the whole movie revolve around two people and some how they didn’t get on my nerves. The storytelling is slow and uninteresting at times, with a movie revolving a dangerous journey from a monster inhabit Mexico you would expect the writer to give you some of information about the monsters he came up with, well if he did I must have missed because I was so bored and stop paying attention as the story really doesn’t do a job of grabbing your attention.

The very few monsters it does have look good, for a low budget movie that is. I was surprise to learn that this was a low budget movie considering the scope of the movie and it’s monsters. The monsters in this movie i’m guessing aren’t the literal monsters, if not, it did a poor job making whatever was meant to be represented as the monster very poorly. For what it did do right I do give praised to, the monsters never had a dull moment when they appeared (with the exception of one scene), the two actor didn’t get on my nerves as they basically had the camera on them for the whole movie, and it’s scope doesn’t make it feel low budget.

So Monsters is a disappointing monster movie that could have benefited with a bigger budget and could have become a better movie. It’s a shame what could have been a great movie didn’t live up to it potential, for it is, it’s not a bad movie, nor is it a great one either.