I’ve been visiting the “Indie Scene” less frequently since it can take seven hours to reach my destination with good traffic. Also, the lack of any film property catching my attention. This year I tended to bat an eye away from them. However, “Spirit in the Wood” is different as John Lepper (a producer of the film) attempted to convince me it was worth my time. Once Lepper mention it was a found footage horror film I started walking off, but told me about it came into production. Apparently it was only possible through the fundings on Kickstarter. 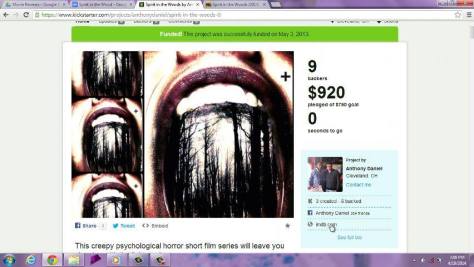 Anthony Daniel who’s the writer, director, producer, music supervisor, casting manager, first degree idiot, and editor who despite not being able to get the budget he wanted still made the film. I can respect that in an aspiring filmmaker. With that finished I gave it a shot out of kindness knowing full well I might end up not liking it.

Once the film got started it was thankful enough to wait seven in to provide a title card that said, “All this footage is found and real. Viewers discretion is advised”. Thank goodness for that warning too since the acting in the first seven minutes is horrific. Not a single a movement, not a single line reading, nothing about the actors made me believe I was seeing real people. It didn’t help either the small audience didn’t buy it either. All that was presented in the first seven minutes are some college students mysteriously vanished (like the audience attention) when entering “Spiritual Woods” known to be haunted. Also, I should note that within these seven minutes it insults horror movies by claiming their plotlines are basically a fabric of fiction and nothing could compare to the real story of “Spiritual Woods”. Once your horror movie has “found footage” labeled to it your horror film lost all rights to trash talk any other horror film.

Spirit in the Woods is about five college students getting lost in the woods. For those wondering that’s the whole movie. Ideas are so scarce that every single thing wrong with the film can be generalized without in depth detail. You’ll find this hard to believe, but the film actually attempts to build up the sense that something is wrong by oddly positioned tree branches. Well they are in the woods and there are tree branches everywhere in the woods. I’m expected to sympathize for a couple of college students that believe there’s a correct way to position tree branches in the woods? Good luck trying to get anyone to a feel any emotions for these “real people”. Every scene is repetitive, conversations are repetitive, absolutely zero likable characters all of whom are annoying, lingers it deadweight proudly, and a ending that shoehorned in promotion for a sequel. So here’s a rundown of the plot without skimping on any details. Five college students get an assignment, five college students decide to do their assignment on “Spiritual Woods”, they go into “Spiritual Woods”, get lost, and killed. That is all folks that happens. Dialogue generally goes back and forth between “I heard something. Oh it was nothing”, “Wait I think I saw something? Oh never mind it was nothing”, and “We’re lost”. For sixty minutes the repetitive dialogue drive these points across. Around the twenty-eight minute in this lovely screen appears.

Dream Comet Studios (founded by the film director Anthony Daniel) had time to “fix up” the footage, but couldn’t be bothered to do a proper spell check. To get the point across to the filmmakers especially Anthony Daniel. Here’s an example so you’ll remember to how tell the two words apart. You use “are” as in these filmmakers are clueless about making a tolerable film. And “our” as in you wasted our (the audience) time with this technically unviewable film with no story. The rest of the film beyond that point is the same thing repeated. Five college students talk about hearing or seeing something that turns out to be not there and being lost. It isn’t until the final fifteen minutes that it breaks away from a cycle of repetition that hammers that perhaps something evil is in the woods. They get killed in by last minute plot twist by girl that just went insane. This twist is just spontaneous as the character never shows ever collapsing into a mental state of insanity by any signs.

The acting is atrocious by the non actors. Their performances prevents the film from selling any dreary mood in the haunted woods. They all come across as just bunch of annoying, dumb college students. As you noticed the image above that’s a picture I took right from the official Facebook page of the film. This pains me to say it, but it doesn’t look like it cost $1,300 dollars to make. At best the filmmakers got three cheap cameras, some gasoline, and some food which consider the talent behind the camera should be around one hundred dollar. Anyone could literally film their friends getting lost in the woods for around eighty minutes which is this biggest problem. Nothing about it presents any good quality from good filmmaking. The editing is a mess and the “fixed up” footage looks worse than the already grainy looking film. There’s no reason for every single moment to be filmed as contradicted by the “real people”. Whenever they say they should stop filming they immediately turn on the camera seconds later. It’s just horrible on every level. Even during the final ten minutes credits roll over a still playing film. Don’t these people know the important things in a movie come before the closing credits not during it.

Spirit in the Woods is the absolute holy grail of bad found footage horror movies. Presenting every negative aspects without a care like using its format as a gimmick, lingering in a deadweight plot where nothing happens, and the nerve to sell itself as “real” while insulting horror films for the same reasons itself fails for. This film is a complete failure in every conceivable way and should have remain lost to never punish any unsuspecting human being.

So right before the first of several closing credits sequences it has a badly photoshop missing persons poster that says to visit its Facebook page to learn more on the true story. Naturally I did and imagine my shock when the film official fan page posted updates mourning those who died in 2013. Then I go to director Anthony Daniel Facebook profile to find those same people who were considered dead in photo from this year thanking its cast. Just wow! That deserves a sarcastic round of applause as Anthony Daniel does give a VAN DAMME on the integrity of his own fiction and creation.