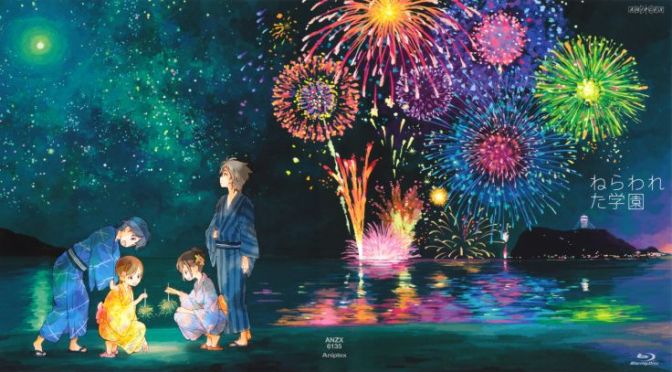 Nerawareta Gakuen effortlessly weaves a story that combines romance, time travel, an impending apocalypse, and growing up into an incomprehensible mess of a film. The film is plagued with aimless direction, among other things, that prevents it from being any more than eye candy. Besides being pretty to look at there’s nothing to be gained from seeing this film that’s a chore to finish.

The premise of Nerawareta Gakuen, which translates to the cooler sounding, but very misleading English title Psychic School War starts out simple. Introducing four characters into what appears will be a romance story with light elements of sci-fi. Following four characters each of whom contain bland characteristics leading to force conflicts that could have been easily been resolved. Being dragged out in order to pad out what little story it has. If it was only focused on the romance in the story, it would have been bland if it revolved around childhood friends along with a love triangle that’s entirely one sided nor add much of a conflict between the characters. Seeing, let alone learning about the character’s relationship with one another is spread thinly in the film. Emoting a sense of boredom that plays the usual tricks (will they won’t they hook up being the main element in use) in its setup.

If it was only a sci-fi than it would have still been incomprehensible. Vague explanations are given on how time traveling works, character backstory is revealed with sparse bits of information, the apocalypse that occurred gets a quick brief mention with unanswered questions, and how psychic powers work is flimsy. Some of it is explained like how other character can unlock the ability to read other minds, but what exactly it can do is left up to the imagination. One of the most crucial elements in the film that receives muddle explanations is an hourglass shaped device that Ryouichi carries around with him which he uses in order to create more psychics. He uses this device predominantly to achieve his goal and by badly presenting it purpose it’s easy to lose sight of how he’s going to accomplish what he sets out to do.

It’s so bad at telling its story that the whole plot has to use a very weak plot point involving a school policy which prevents students from bringing cell phones to school in order to show visible progress of the central conflict. In the worst possible way it tries to use this plot point to say some sort of commentary on social interaction by having students ignore or enforce the no cell phone policy. On a dramatic level this plot point becomes exaggerated that anything serious it wanted to say is downplayed in delivery. Seeing students expresses their hatred for cell phones in an over the top presentation is unable to be enjoyable in silliness because it wants to be taken seriously. There’s no build up to steadily show its central conflict becoming larger nor provide enough visual cues that more students are becoming psychic. At most, it only shows two students becoming physic which isn’t enough to provide a glimpse at the bigger picture. Instead characters have to exposition it to each other to get important information out. Sounding unnatural in several conversations.

The characters aren’t any better. Our four main characters in the film are archetypes that get introduced and three of them remain static in their journey. Kenji Seki is a dumb teen who has bad luck and oblivious to the fact his childhood friend Natsuki Suzuura loves him. It’s reasonable why Kenji is oblivious about Natsuki feelings since in one minute Natsuki teases him, punches him, and calls the police on him. He’s an idiotic character who’s unable to process thoughts. Unable in the fact he doesn’t how to handle any situation when comforting friends. He’s simply lucks out in how problems play out. Kenji is underdeveloped, though the only one who seems to grow in the film. In some ways he matures gaining a different outlook on life. Without much of a character to explore he ends up banal like the other characters.

Natsuki Suzuura is the typical girl next door who picks on Kenji to hide her true feelings from him. The way she acts needlessly prolongs an easily solvable conflict. She even says herself if she was more direct in expressing herself she wouldn’t be going through any overblown struggles. She’s another bland character who’s made entirely unlikable by how she acts. The first time she’s seen in the film she reports Kenji to the police by lying that Kenji was going to rape her. This is also how Natsuki character is introduced in the film, which gives a bad first impression of her character. Around the 23 minute mark Natsuki slaps Kenji for a comment he made regarding loving someone without mutual feelings being returned. Natsuki up to this point has shown no sign of even liking Kenji. Within that time frame she acts like a tsundere hitting Kenji throughout the film and teases Kenji nonstop who does not like getting teased. Despite acting how Natsuki does she wonders why Kenji doesn’t love her. When the film ends she still hasn’t a change bit proving she’s the film most dense character.

Kahori Harukawa is an unimportant character. Besides one brief scene the writers prefer to keep Kahori entire character one dimensional. Her backstory is glanced over with a brief mention which ends all of her characterization with a couple of seconds. As a character she’s weak and her place in the story is unimportant. She has no conflict nor does anything to advance the story. She also falls in love with Ryouichi Kyougoku for shallow reasons. It’s explained she fell in love with him at the first sight of Ryouichi and the material reinforces that fact. There is hardly a scene of Kahori and Ryouichi getting to know each other. The only thing they know about each other for a majority of the film is they both play piano. That’s about it. Once it reaches the hour mark both characters are lovey-dovey towards each other despite only sharing one scene of actually doing anything together outside of school. This later comes to affect the final act of the film. Due a specific revelation both characters won’t be able to be together. Instead of being a strong dramatic pull in the story it’s simply just there as fluff.

The worst character in the film is Ryouichi Kyougoku who’s the popular, mysterious transfer student with a hidden agenda. Ryouichi single handedly brings down the time travel and physic aspect of the film. He’s a poorly written character, giving out his backstory unnaturally as possible and providing vague explanations on the process of time traveling and physic powers. He knows how everything works, but the audience doesn’t making any scene that has anything supernatural onscreen become convoluted. Almost as if literally making up the rules of how time traveling and physic powers work as he goes along in the story. He receives scatter characterization some of which gets dropped. In the film its mentioned Ryouichi will execute a revenge plan. What exactly it was is delivered in a throwaway line that’s easy to miss.

The animation is done by Sunrise studio and it’s virtually flawless. Director Ryosuke Nakamura eye for details is rich in every single scene of the movie. Meticulous details in the visuals from the cherry blossom petals being blown in the breeze to the gleaming rays of light shining through the classroom windows. Everything from beginning to end looks beautiful. Another outstanding feature is the use of color hues and tones to accentuate and render scenic clouds and evening skies. There usually something always moving on screen with high detail that it becomes mesmerizing. For a majority of the film it movements sticks to the ordinary with the occasional over the top short burst moments and supernatural elements when on display. No matter what’s on screen the amount of time it must have taken to animate the film is something to appreciate.

The voice acting is in general is passable, but underwhelming due to the material. Kana Kanazawa plays Kahori who I already mentioned is pointless in the story. It’s a performance that I can’t blame Kanazawa for phoney in since her character hardly changes emotion limiting options in her portrayal. Daisuke Ono, who plays Ryouichi Kyougoku has a similar problem. A big role with limited range, which again limits the voice actor abilities to portray the characters. That’s two talented voice actors who are handicapped because of the material.

Yuutaro Honjou plays Kenji Seki whose performance does allow ranged. Unlike his more experience co-stars his balance of drama and comedy generally misses the mark. When he’s meant to sound sincere it comes across as a bad rehearsal take. Sounding mundane when experiencing important life changing events. Mayu Watanabe plays Natsuki Suzuura does a good job. Unfortunately because of how her character is written she also comes across as the most annoying. Playing a tsunderes she sounds sweet one moment then flips the switch to being angry the next. That’s our four lead actors, each of whom are unable to overcome the material shortcoming. The supporting cast because of limited screen time don’t suffer the same problem. They’re fine in small roles. There’s no English dub for the film which given the sloppy delivery of the story is understandable.

The soundtrack is done by Shusei Murai and it’s repetitive. Nearly all the tracks sound sentimental working against the film. There’s hardly any variety in the music Murai composed. Becoming aggregating to listen to when most of the tracks are soft piano ballads that sound similar to one another with just a minor variation of one track. Too many tracks sound too similar to each other its entirely lazy. To paint a clearer picture on the lack of varied music the OST for the film there are 25 tracks and 22 of them are soft piano ballads. If it doesn’t feature a soft piano ballad it’ll feature a Violin another instrument Murai goes out of his way to make annoying to listen to. Hearing the soundtrack is infuriating because no effort is made to make each track sound different. Getting the suspicion that the soundtrack simply looped one song over and over again. There are only two distinctive sounding and noteworthy tracks in the film coming from artists Ryo and supercell. Like the rest of the score, the songs these two artists provide are blissful with usage of soft piano ballads. They are nice songs, even if they are forgettable immediately after they end.

Nerawareta Gakuen is a complicated mess and poorly told, but does make sense. Although this being my second time seeing the movie I wrote down notes which in the end made the story sensical. However, the information is so poorly relayed to the audience due to brief throwaway explanations that reveal very little or simply glancing over important details that are essential to understanding its story. Before reaching the one hour mark the film fails to provide characters good enough to carry a story, wanders around aimlessly without a purpose, and finally a conflict that uses convoluted plot points making it uninvolving. The remainder of the film will feel longer than it actually is. That’s not even taking into account the repetitive soundtrack becoming grating on the ears as it goes making the experience worse. Pretty to look at, no doubt, but with no substance whatsoever it makes you ponder what a waste of beautiful animation.