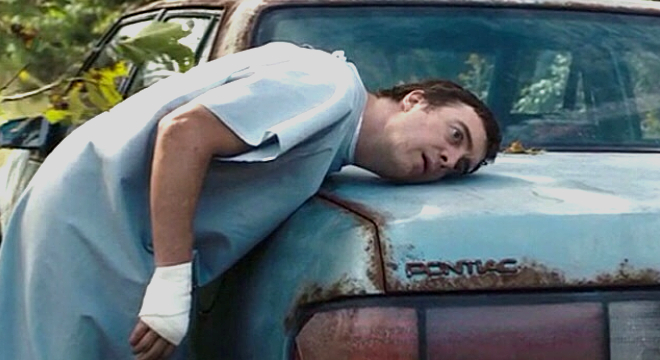 “Spirit In the Woods” was a film that was funded through Kickstarter that showcased yes people are willingly to pay for terrible, terrible found footage horror movies. Ironically a week after seeing that film comes “Blue Ruin” which once again also gain some of it funding through Kickstarter that proves there is talent worth helping out. On a technical level there’s nothing about “Blue Ruin” that makes any investors question their contributions. However, it’s writing on the other hand does make you question if it worth sitting through a slow film that in any review that provides a synopsis is about as developed as the film plot and character ever gets.

Blue Ruin follows a mysterious outsider’s whose quiet life is turned upside down when he returns to his childhood home to carry out an act of vengeance. Minimal is the single word that best describe the story of “Blue Ruin”. There’s a lack of characterization, spoken dialogue, and no subplots to flesh out the simplistic material. It strips down the revenge story down to its very basic which both works in favor and against the film. For starter its protagonist, Dwight, is mostly a silent loner who lacks the appropriate skills to kill anyone silently, yet at the same time whenever he needs to enter a house or gain access to a car or specific items he does so with ease. It wants to portray revenge realistically, but not if it requires the writers to think. Made evident by no news coverage of the first person Dwight kills in a restaurant, the convenient location of the climax, no suspicion made by the hospital staff of Dwight arrow wound which earlier he attempted to heal himself, and characters willingly do whatever Dwight tells them too. Which is where the dialogue handicaps the film. Following Dwight who speaks very little there’s no connection made towards him. His motivation is simple, but not fleshed out enough to make it justifiable to sympathize. There’s a difference between a reliable blank page and a blank page that’s one dimensional. Falling into the latter because what little conversations it has is reverse for exposition to flesh out it simple plot. Other characters fall in the same pit trap with one solely invented to give expositions and plot points that otherwise would have made the climax less meaningful. With a conflict that on both side neither make a convincing argument nor flesh out it “antagonists” finding meaning it story is just as low valued as it characters. Partially realistic, absent characterization, and not building tension within the writing is not presented as an equal, but rather an add-on to the main technical prowess.

Writer/director Jeremy Saulnier has created outstanding atmosphere to go along with his motion picture. Often drenched in different tones of the color blue. Saulnier films with such a sense of urgency, that it aids in keeping its audience captivated. Easing from life and death scenarios to handling each of its gags in an appropriate way. None of it violence feels gratuitous, as it adds to this unforgiving atmosphere on the painful reality of violence. Macon Blair is written shallowly so he can’t be blamed for not connecting with the viewers. Faced with the unenviable task of making Dwight at once both childlike and savagely capable, a feat made all the more demanding by a restrictive narrative. Combining wide-eyed deadliness with the disarming lucidity of his conviction to create a antihero worthy of Saulnier’s exquisitely crisp cinematography. He doesn’t talk very much, delivering a lot of emotion through the use of body language and facial expressions. Blair makes it easier to sympathize with his situation rooting himself in reality not blowing his performance. The supporting cast are solid in their role given their small screen time. However, the whole film rest on Blair shoulder which if given to the wrong actor would have been disastrous.

Blue Ruin might be a subtle a revenge story, but lacking substance in character development. It wants to portray violence in a ugly and realistic picture which is difficult when the protagonist can easily get to his destination with presented consequences that hold no weight aside from the climax. Technical side of things is never an issue understanding the meaning of visual motifs, atmosphere, and pacing that builds tension on a lack of substance. Acting is also terrific especially Macon Blair who who in spite of being given a characters that conflicts with the aimed portrayal never loses the sense of reality in his portrayal. Director Jeremy Saulnier understands the visual side of film as an language, but writer Jeremy Saulneir speaks another language that wasn’t content with itself that leaves it damage on a flawed simple story.