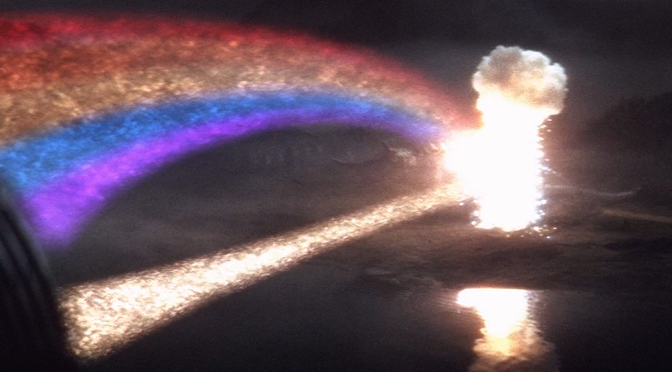 So the first Gamera movie wasn’t exactly a huge hit for me, but it succeeded in making me like the monster. Unfortunately removing Gamera for most of the movie is not exactly enjoyable in the sequel.

A giant monster that emits a destructive ray from its back attacks Japan and takes on Gamera. That what’s the plot synopsis said on the box, what a lie. For most of the movie Gamera is missing and Berugon is actually the main focus of the movie. It’s a shame to, it opens up with Gamera destroying a dam which is the movie best moment and than goes to boring human characters. The story is really uninteresting and I laughed at some of the dialogue. Like in one scene, the native people warn our boring main human characters not to go to Rainbow Valley, my first guess was that evil Care Bears lived there. I was sadly wrong and what were left is an uninteresting plot with boring human characters that take up a good portion of the movie that should have belonged to Gamera.

As for Gamera, I was disappointed that I didn’t get to see more of the monster since the movie starts by showing him destroying a dam that got me pumped up. Sadly he’s missing for most of the movie, Berugon on the other hand is the weirdest thing i’ve ever seen in a monster movie. Berugon powers are pretty lame too, he shoots a freeze ray from his tongue and has the ability to shoots a deadly rainbow. So after being amazed by the fact that Berugon can shoot a deadly destructive rainbow, I was disappointed in the finale. It was to short and it wasn’t worth watching the boring human characters for most of the movie.

So a Gamera movie doesn’t that hardly shows Gamera doesn’t work, that what I wanted to see. What I didn’t want to see was Berugon for most of it and the boring human characters. To bad the film only good moments are when Gamera shows up, to bad there’s hardly any of that.